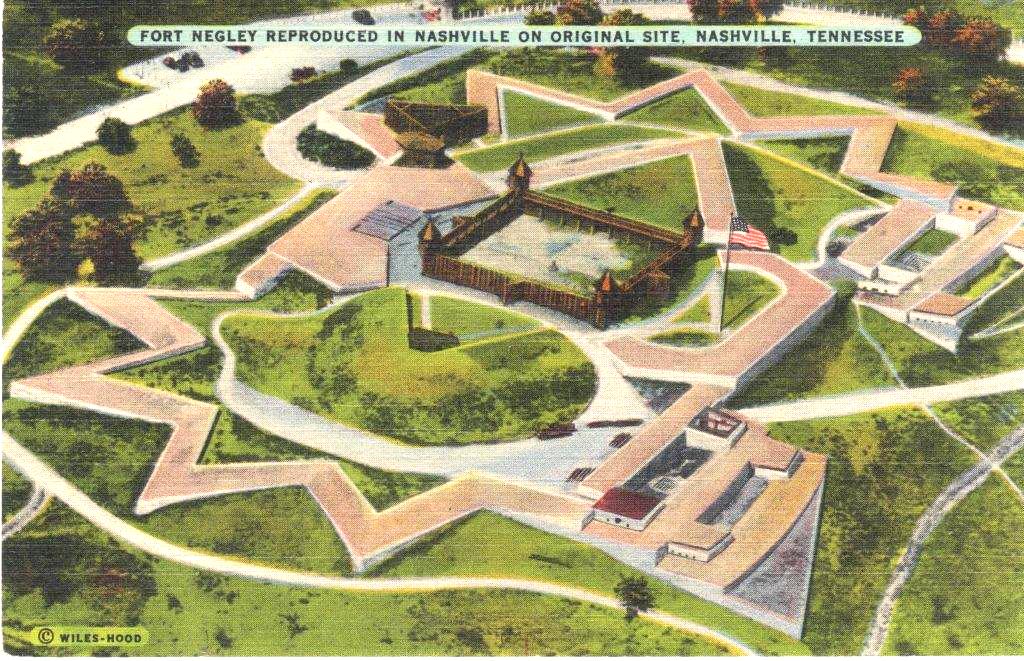 Join Historic Nashville for a members-only tour of Fort Negley Park on Saturday, October 7, 2017 at 10:00 AM

Meet at the Fort Negley Visitor’s Center at 10:00am.

A Brief History of Fort Negley Park
By Krista Castillo

In 1805, Judge John Overton of Travellers Rest began obtaining the property known as St. Cloud Hill. Although privately owned, the wooded hill became a popular retreat from the growing city.
In February 1862, the Federal Army took possession of Nashville. Over the spring and summer, military officials, recognizing the possibility of enemy invasion, initiated an ambitious defensive strategy and the army seized private property for the purpose of constructing fortifications. In southeast Nashville, Captain James St. Clair Morton selected St. Cloud Hill for due to its proximity to the southern approaches to the city via the Louisville/Nashville rail line and the Franklin and Nolensville Pikes.

Thousands of African Americans enslaved within the city and on nearby plantations viewed federal forces as protectors. Soon makeshift camps grew around the hills designated for fortifications. Unprepared for the massive influx of refugees and the challenges of hiring enough laborers to complete the defenses, military officials formulated a system for employing former slaves. Plagued by internal disputes, corruption, prejudice, and indifference, the army rarely fulfilled promises of pay, rations, and shelter. As a result, hundreds perished from exposure, disease, and hunger in the camps.

Permanently displaced by war and the end of the slave system, many African Americans remained in the refugee camps established on St. Cloud Hill. Over time, these residents settled into comfortable neighborhoods surrounding Fort Negley. Children growing up in the segregated neighborhoods separated by St. Cloud Hill found freedom from society’s strict racial codes within the old fort’s protective walls.

Between the summer of 1862 and September 1867, thousands of Federal troops, including United States Colored Troops, occupied St. Cloud Hill. Jacob Coonley’s 1864 panoramic image reveals soldiers peering over the eastern slope to the rail yard and the remains of more than 11,500 Federal soldiers contained in three Federal cemetery lots on and around St. Cloud Hill, including the City Cemetery.

When the Federal Army abandoned Fort Negley’s stone skeleton and St. Cloud Hill in 1867, picnickers returned to the site. Some envisioned a grand manicured boulevard stretching from an elaborate public park on St. Cloud Hill to the Capitol Building. Although attempts in 1913, 1926, and 1929 to establish a National Park at Fort Negley in honor of the Battle of Nashville were unsuccessful, newspaper reports from across the country reveal the significance of the battle and the fort in American cultural memory.

In 1928, the Nashville Park Board purchased the 50-acre parcel from Judge Overton’s heirs for the purpose of establishing a public park. Between 1934 and 1941, funding and labor provided by the Works Progress Administration made restoration of the fort and enhancement of the park possible. The WPA Project Proposal dated May 1, 1935 stated, “The park will be a decided addition to the park system of the City of Nashville besides adding an excellent historical point of interest for tourists.” Fort Negley Park boasted four softball diamonds, a hard ball diamond, a lighting system, stone bleachers, a stone comfort station, and a multi-level stone retaining wall constructed along the park’s eastern boundary. Decorative boundary walls along Chestnut Street and encircling the fort structure and the large stone entrance, key components of WPA design and construction, emphasized the city’s desire for creating a large multi-use park in south Nashville. These decorative walls, the retaining wall, and large portions of the bleachers remain on the property today.

Although the surrounding African American neighborhood developed from the Civil War-era conscripted labor camps, the eastern portion of Fort Negley Park catered to thousands of white ball players and spectators throughout the 1940s and 1950s. In 1946 and 1953, the Park Board rejected requests from the African American community to designate Fort Negley as a “Negro” park. During the mid-1960s, the construction of I-65 and I-40 displaced the neighborhoods located south of St. Cloud Hill forever altering the character of the area. Later, the Edgehill Urban Renewal Program allowed for the leasing of portions of the park to the Children’s Museum (now Adventure Science Center) and the Nashville Baseball Club, Inc., at nominal rates.
While Metro sought to revitalize the area through new construction, others worked toward national recognition of Fort Negley Park as a historic site. In 1975, the site was recognized by the National Register of Historic Places. Five years later, Metro Historical Commission funded a study for the purposes of acknowledging “a growing awareness of the uniqueness of Fort Negley in the region” and for developing “a concept for the ultimate use of the historic resources to the advantage of the community at large.” In conclusion, the study recommended eliminating unauthorized use of the site, clearing the hilltop of uncontrolled vegetation, interpreting the fort structure, promoting tourism, and providing basic amenities such as picnic tables and restrooms.
The Fort Negley Master Plan released in 1996 expanded on these recommendations, calling for a interpretative center and dedicated professional staff. Fort Negley Park, including the stabilized and interpreted fort structure, opened in 2004. Three years later, the city constructed the Fort Negley Visitors Center. The 2007 Supplement to the 1996 Master Plan, recommended reclamation of the eastern portion of Fort Negley Park once the Nashville Sounds vacated the property. The plan envisioned the addition of a Civil War museum and research center, a multi-purpose green space, and a pedestrian connection to the Nashville City Cemetery.

Of the five major fortifications constructed by 1864, only Fort Negley remains today.