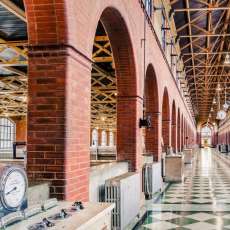 Historic Nashville members are invited to a behind-the-scenes guided tour of a new exhibit, “Hiding in Plain Sight,” on Saturday, April 1, 2017 at 10:00 a.m. at the downtown Nashville Public Library.

As a special treat for Historic Nashville members, the tour will be led by the exhibit’s creators, artist Anna Jaap and writer Robert K. Oermann.

The exhibit sheds a new light on local places residents might consider “ordinary” – until they learn about notable things that happened there.

As our tour guides, Anna Jaap and Robert Oermann will share their stories of collaborating to select the unique places featured this exhibit of photos and stories including the homes once occupied by music legends Patsy Cline and Hank Williams; the Omohundro Water Treatment Plant; Nashville’s first automobile factory; local churches with notable Civil Rights movement history; and even the spot where Lay’s potato chips were once made.

If you are not already a member of Historic Nashville, follow this link to join: http://historicnashvilleinc.org/get-involved/join/.

About the Exhibit Creators

Anna Jaap took her first photos at age 15 using a vintage German camera. She received her BFA from Lipscomb University, and has worked as a studio artist for 25 years. Acclaimed for their color sensibility and affinity for nature, her pieces have been exhibited across the United States and are collected internationally. She lives in Nashville, and serves on the board of Watkins College of Art.

Robert K. Oermann is known as the “dean of Nashville’s entertainment journalists.” He has authored eight books about the city’s music history, and his work has been published in more than 100 periodicals, more than 50 TV specials and 129 record-album liner-note essays. He is vice president of the Recording Academy in Music City and serves on the board of the Nashville Public Library.