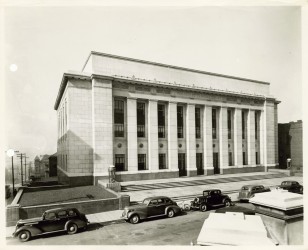 Join Historic Nashville for a members-only tour of the Tennessee Supreme Court Building on Saturday, September 24th, 2016 at 10:00 am.

Join us for a tour of the historic Tennessee Supreme Court Building which was listed on the National Register of Historic Places in 2014.

The four-story building was built in 1937 by Rock City Construction Company and was designed by Nashville architects Marr & Holman in a style known as Stripped Classicism. Currently, the Tennessee Supreme Court offices are housed in this building, and the court meets here when it is in session in Nashville. Parts of three films were shot in the court building: “Marie” in 1984 starring Sissy Spacek, “Last Dance” in 1995 starring Sharon Stone, and “Billy: The Early Years” in 2008. A representative will lead us on the tour which will last approximately an hour.

Note: there is no designated parking for this tour. Please utilize parking on any adjoining streets and garages. Members should meet at the front of the building.

Hope to see you there!