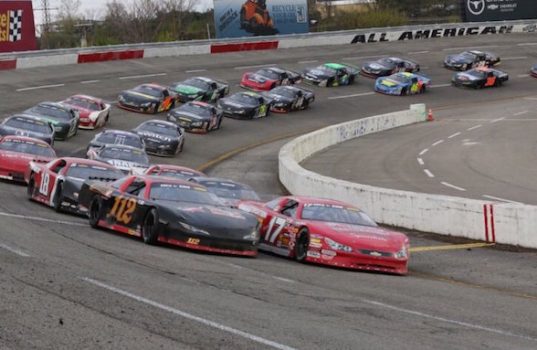 Join us for a Behind-the-Scenes tour of the Historic Fairgrounds Speedway Nashville on Saturday, February 16, 2019 at 10:00 am led by Donnie Redd, Historian of the track.

The Fairgrounds Nashville originally opened in 1891 as a horse racing track named Cumberland Park. The park became the home of the Tennessee State Fair in 1906 and was purchased by the Davidson County government (later Metro) in 1910.

The track first featured “horseless carriages” and motorcycles on June 11, 1904, on a 1 1/8 (1.125) mile dirt oval. Races were canceled after a motorcycle ran into the back of a car that was lining up. Harness (horse) racing events were also held at the track. In September 1904 another series of races was organized. Most of the entrants came directly to Nashville from the 1904 World’s Fair in St. Louis, Missouri. Racing pioneer Barney Oldfield was one of the entrants. People marveled at cars driving over 60 miles per hour (100 kilometers per hour). The track began holding annual events in September 1915 to coincide with the state fair. Many of the same drivers from the Indianapolis 500 brought their cars down to Nashville.

In 1958 car racers decided to build a paved racetrack. The racers ended opposition from horse racers by building a horse track. The racers got a 10-year lease from the state fair board in order to build a paved 1/2 mile track which shared the front stretch with a 1/4 mile track. On July 19, 1958, the first race was held at the new speedway. Races were held only on the 1/4 mile track (except for special events).

The track held at least one NASCAR Cup race each year from 1958 to 1984. A capacity crowd of 13,998 watched Joe Weatherly win the first NASCAR race on August 10, 1958. Geoff Bodine beat Darrell Waltrip for his second career win in the last Winston Cup race (1984) at the track. NASCAR left the track because the grandstands are too small, and because of a dispute over who would manage the track took place prior to the start of the 1985 season. Of the 42 Cup races, Richard Petty has nine wins, with Darrell Waltrip right behind with eight wins. Waltrip won 5 of 6 races between 1981 and 1984. Waltrip’s victory in the 1988 Busch Series event gives him the career best nine wins total at the track.

The speedway is currently an 18 degree banked paved oval. The track is 0.596-mile (0.959 km) long. Inside the larger oval is a quarter-mile paved oval. A lot of hard work and support from many has been a part to save the future of the speedway when announced in 2010 the final season. A crowd of over 3,000 people, the largest ever to attend a Metro Nashville council meeting was a determining factor for the track to be saved. The Formosa family last year was awarded a five-year contract for the speedway, the longest lease awarded dating back to the 2004 season. Speedway Motorsports Inc. is presently in negotiation to team with Formosa Productions to bring back the glory days of NASCAR premier national racing events. The addition of major NASCAR events mixed with local racing would contribute to the success of property campus which will include a new Expo Center and a new stadium for use as a soccer complex.

**Enter the Speedway at the back entrance off Wedgewood onto Raines Ave gate there is a ticket booth sitting in the middle of the road.

**We will park behind the track next to the buildings. There will be someone directing us where to park.