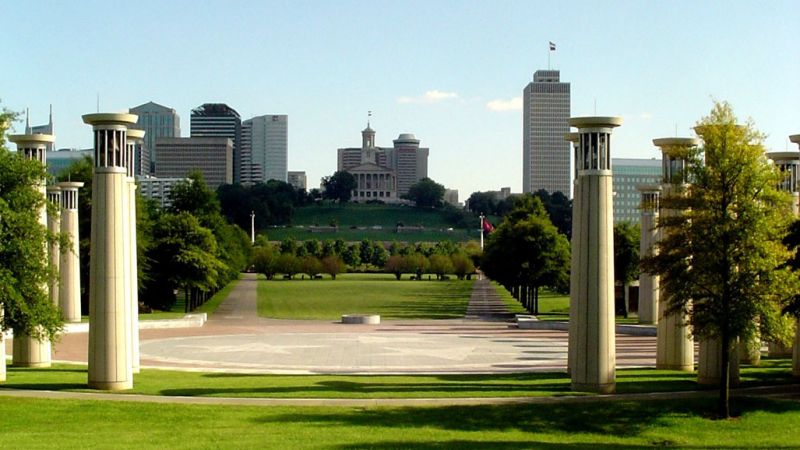 Join us for a walking tour of Tennessee Bicentennial Capitol Mall, Landmark urban park honoring 200 years of statehood with Kem Hinton, FAIA on Saturday, July 14, 2018 starting at 9:30 am.

**Note: This tour will start a half hour earlier than our normal tours due to the recent extreme heat. With all the events scheduled in Downtown Nashville area the earlier we arrive makes it easier to find parking and avoiding the midday heat.**

Although most Tennesseans first heard of the Tennessee Bicentennial Capitol Mall during the year of its celebration two decades ago, the path of its creation is as old as the state itself. From details of the first settlements on the site of the Mall to descriptions of items still to come, this tour will capture the essence of the park which was dedicated on June 1, 1996.

This tour is a walking exploration of the 19-acre park, an urban design achievement designed to honor and forever preserve an unobstructed view of Tennessee’s most important structure, the State Capitol. Creating an educational and entertaining stretch of greenery with walkways featuring historical events, including a granite map of Tennessee (one of the largest such maps ever made), the Mall has a fabulous story to tell.

The basic idea for this urban park originated several decades ago, inspired by the National Mall in Washington, DC. Yet the evolution of the site and surrounding vicinity is a fascinating, tale stretching back for more than three centuries. The design process, one involving a broad array of designers, government officials, members of the Bicentennial Commission, and statewide ‘characters,’ was long, complex, and at times controversial. With a theme of “the Land, the People, and the Music of Tennessee,” the unique outdoor museum was conceived and fashioned. Full of elements and features that exalt the unique characteristic and history of the Volunteer State, the award-winning Mall has become what was intended: a gift to the citizens of Tennessee.

Hinton is also the author of A Long Path: The Search for a Tennessee Bicentennial Landmark, a hardback publication that documents the history of the site and the many factors that inspired and shaped the design of the Mall, one of the largest post-WWII urban parks in our nation. It was released in 1997 by Hillsboro Press. Copies will be available during and after the tour.

Meeting point will be at the enormous map of Tennessee on  James Robertson Parkway it in the shadow of the Capitol.