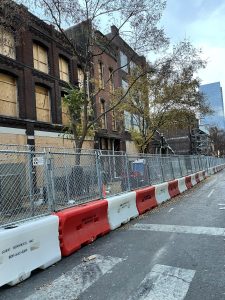 Nobody imagined that, just a few weeks after Historic Nashville, Inc., announced its 2020 Nashville Nine, someone would set off a bomb in one of Nashville’s most historically significant areas, putting at risk an entire stretch of Second Avenue North that had remained remarkably consistent for more than a century. Nearly a year after the Christmas Day Bombing, plans are in place to restore and rebuild much of the four buildings most damaged by the blast, 170-176 Second Avenue North. Historic Nashville holds preservation easements on all four of those properties. One of those buildings, 172 Second Avenue North, was damaged beyond repair. Proposed plans for the other three buildings appear to generally comply with the Metro Historic zoning overlay, but proposals and finished development are entirely different things. With its preservation easements, Historic Nashville made a commitment that these precious pieces of our history are protected in perpetuity, and we urge those implementing the rebuilding to make sure the buildings retain as much of their historic and architectural integrity as possible.