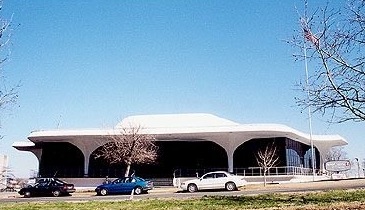 Join us for a special behind-the-scenes tour of the WTVF News Channel 5 on Saturday, September 29, 2018 at 9:45 am, led by Storm 5 Weather Meteorologist Heather Mathis.

WTVF is a is a CBS-affiliated television station in Nashville, Tennessee. WTVF first signed on the air as WLAC-TV on August 6, 1954. WLAC-TV was owned alongside WLAC radio (1510 AM) and later WLAC-FM (105.9 FM, now WNRQ). With WLAC-TV, Nashville became one of the smallest cities in the United States to have three fully separate network-affiliated commercial television stations. WLAC-TV was sold in 1975, and new owners changed the station’s call sign to the current WTVF on December 1 (the callsign change was brought on due to an FCC rule in place at the time forbidding TV and radio stations in the same city but with different owners from sharing the same call letters). WTVF is currently owned by Scripps Media Inc.

As WLAC-TV, the station helped launch the career of a young African-American reporter and local Nashvillian named Oprah Winfrey by making her a regular news anchor in the early 1970s. The station’s Studio A, which was built in 1967 near the Tennessee State Capitol building, was also the home of the hit show Hee Haw for most of its 1968 to 1993 run. Behind Winfrey, the station’s most notable anchor is Greek-American Chris Clark (real name Christopher Botsaris), who served as the station’s main anchor for 41 years from 1966 to 2007, longer than anyone in Nashville television history. In June 2006, Clark reduced his daily anchoring schedule to only the weeknight 6 p.m. newscast and announced his retirement at the end of his contract in 2007.

On April 16, 1998, WTVF was knocked off the air due to an F3 tornado striking downtown Nashville. This occurred while meteorologists Ron Howes and Joe Case were broadcasting live, showing the actual tornado from the station’s SkyCam as it entered downtown Nashville. Before the interruption of the signal, which was caused by winds in excess of {{convert|100|mph|km/h|0}, the station’s weather camera on top of AT&T Building (then BellSouth Building) captured the tornado as it moved into downtown Nashville during the station’s broadcast of wall-to-wall tornado warning coverage that afternoon. The station returned to the air shortly after that.

Park in the lot behind the station on 4th Ave N just before Harrison St.

We will meet in the parking lot.

We encourage members to arrive early, once the tour begins you will be unable to join later.